Make Your Job Easy With A Quilting Needle Puller

For people who enjoy handicrafts, a quilting needle puller is a device that makes it easy to draw out a needle once it has been through the layers of fabric. When a needle comes out of the other end of the fabric, only the pointed part shows slightly.

This along with the sharp end of the needle not only makes the drawing out difficult, but once can also get one’s fingers pricked. This device holds convenience for many, even those who do not specifically enjoy quilting since it can be used in almost any sewing scenario.

Even though the quilting needle puller can be used for almost any sewing scenario, this does not undermine its importance for quilting. Normal sewing is just used to join two pieces of cloth together. However, in quilting one usually has to sew more than two layers of fabric.

The added layers of clothe mean that there is considerably more friction between the needle and the medium, which makes pulling out the needle difficult. Hence for quilting, a needle puller becomes even more important. 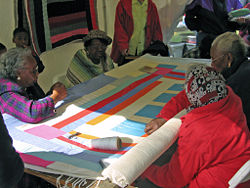 Many people might think that the quilting needle puller is just a gimmick and a product that is just sold to make money. However there are many quilters who after using just it once seem to never get enough of it. Of course, who wouldn’t have gotten their fingers pricked by a needle or two during quilting?

Moreover, no one would want to get their fingers tired while trying to pull out the needle from a heavy quilt when an option is available that can do that job without any effort!

It is interesting to note that the quilting needle puller is not so common in the US as compared to Germany. The reason for this observation is that a very famous hand-quilting instructor recommends it in her workshops in the European State. In the US, alternatives such as tweezers, which are available at Wal-Mart, are used.